(Note: an updated version of this post has been created incorporating the 2018 data from DeepMind.)

Google DeepMind is frequently considered to be the world’s leading AI research lab. Alphabet, DeepMind’s parent company, has been investing heavily in DeepMind over recent years. When DeepMind’s operating costs are extrapolated the trendline indicates that the cumulative investment into DeepMind could approach the levels of historic large-scale national and multinational efforts in the coming years. A plot depicting this extrapolation is shown below. 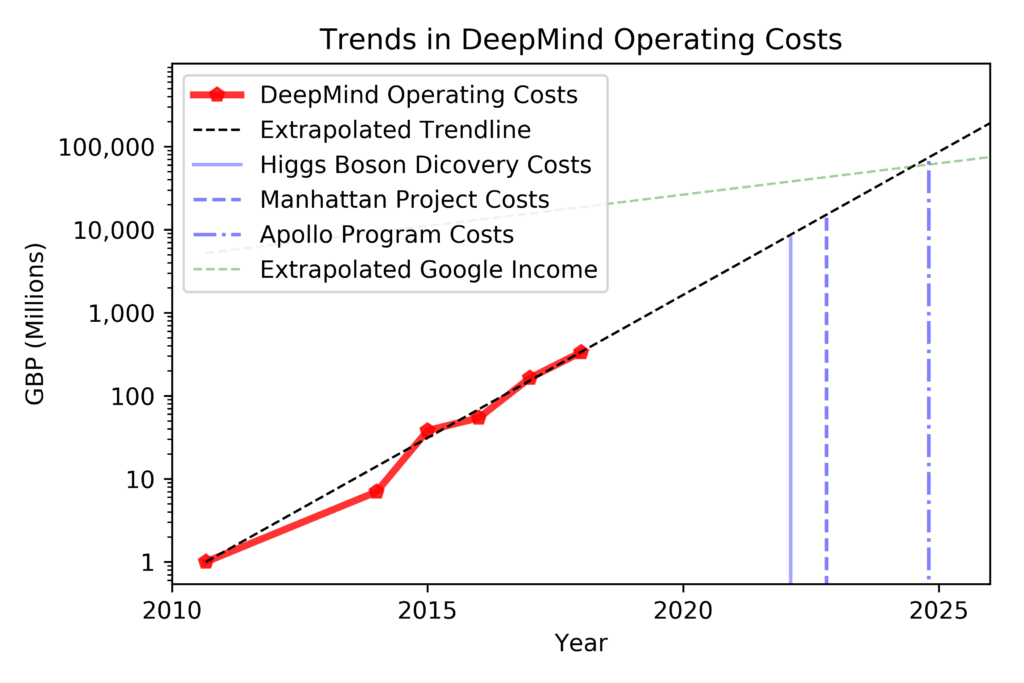 A plot of DeepMind’s operating costs extrapolated to 2026.

The construction of the Large Hadron Collider and the discovery of the Higgs Boson, The Manhattan Project, and The Apollo Program represent some of the crowning achievements of science and engineering over the past century. Inflation adjusted estimates for their costs are $13.3B, $23B and $112B in 2018 dollars, respectively. If Alphabet continues to increase investment into DeepMind at the current rate, then the cumulative investment would reach the level of the Apollo program in September 2024.

Of particular interest is that it is economically feasible for this trend to continue long enough to reach the levels of investment of these historic scientific feats (Alphabet will generate enough income over the next six years to sustain the required investment). Given that Alphabet does not pay a dividend and that it ended 2018 with more than $109B in cash, this is not only feasible but also plausible. Even if the rate of investment slows, DeepMind could still be reaching these unprecedented levels of investment into scientific research sometime over the next decade.

NOTE: As a subsidiary of Alphabet DeepMind operating costs would not typically be reported publicly. However, DeepMind is still incorporated in the UK and thus have to file an annual financial report with the government. So, DeepMind’s annual operating costs for the preceding year are made public sometime in October of the following year and made available online.

NOTE: The Jupyter notebook for generating this figure can be found here.